In the next couple of days, I'll be posting about Charles Leland's famous "Aradia"- a half-secular, half-theological manuscript he produced in the very twilight of the 1800s regarding folk religion in Tuscany- a literal sect of witches.

The material is already live but I've learned that with many manuscripts (including those of quite literally ancient origin) Createspace is a stickler for copyright and will often force the uploader to prove that the material in question was out of copyright to begin with or was authorized. The Aradia is no longer in copyright (as listed in numerous sources) but I anticipate, in the next 48 hours, an automatic hold to be issued. As such, to avoid frustration, I'll wait until then to link it here.

My next works through the end of February are the Liber Salomonis, two short works by Hollandus, and reworkings of the Black Pullet and Testament of Solomon for cover and internal art and formatting. I also wish to release a second edition of my booklet on ASMR (I have compiled a great deal of new material and intend to illustrate it also) and work on texts regarding politics, Luciferian philosophy, ethics, transhumanism, and other topics.

The remaking of Morbid Stories and the long-awaited second compilation of the same will also be in the pipeline this year, along with "Sickness in Hell" the infamous work that started it all. I've outlined a novel too.

As you can tell I'm quite busy. New ideas and manuscripts pile up faster than I can reasonably process them.
Posted by Styxhexenhammer666 at 10:46 PM No comments: 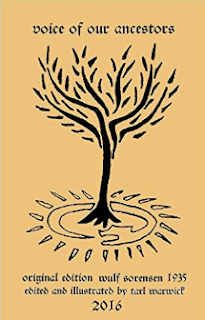 And now comes Sorensen's "Voice of our Ancestors." This interesting little tract comes from the middle of the 1930s in the lead-up to the rise of the third reich and the beginning of the second world war.

It shows the alienation of the traditionalists at the time and the rise of folkish mentalities- some of which were more vicious than others, just as leftist ideologies followed the same suit at the time in accordance with the alienation felt by the masses involved with such ideologies.

Sorensen, once thought to be Himmler, now known to be Frithjof Fischer, analyzes "Snow White" as a metaphor for and symbol of the rise of Rome and the bastardization of what he feels is a former, utopian or golden-age style Germanic culture by christianity and judaism, A worthy manifesto of sorts.
Posted by Styxhexenhammer666 at 9:42 AM 1 comment: 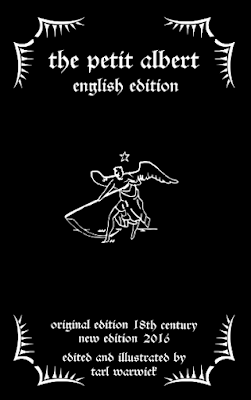 And now the moment you've all been waiting for- or at least those of you gobbling up all the occult literature you can find.

The Petit Albert is perhaps the best of all grimoires; longer and more in depth than the Red Dragon, more diabolical (at times) than the Grimorium Verum, and significantly more refined than the Black Pullet for talismanic workings. Unfortunately, until today editions of this same work have fallen into three categories; those in the original French (useless to most of the English speaking occult world), limited English editions, often expensive, which often seem to make wild claims notably that it was the "Grimoire of Marie Laveau", and ebook-only editions that seem never to allow a preview; that this may indicate a lower quality product is clear.

As such I took the liberty of translating, editing, and illustrating this edition myself line by line- my French skills are intermediate with regards to written material (and far less than intermediate in speech!) but it wasn't particularly difficult- the similarities of the French language to English made it simple to translate the headers of each section and proceed from there with help from a French-English dictionary and copious amounts of caffeine. I have held the price of the edition down specifically because I want my name associated with what might be the first "good" English release of the work.

The content can be roughly arranged into the following; passages with folk rites (mostly medicinal), alchemical passages with a utilitarian purpose in mind, and talismans. The talismans include as well an extremely simplistic expose on planets, days, and hours, and associate with a variety of perfumes (fumigation) used to consecrate the symbols themselves. While some of the chemical workings here are blatantly hazardous (the work admits this, especially where it suggests cooking with arsenic!) most are fairly easy to understand. We even see here recipes for what we might amusingly consider fertilizer among other things, and the use of saltpeter as a medicine is rampant.

It's origin appears to have centered around a person or person's at the time which compiled material both domestic and foreign, old (at the time) and then-modern. I make the claim here that this represents the first truly cosmopolitan grimoire; we see many of them in the modern age; many of the recently authored works we see from some of the occult publishing firms of the world combine, for example, Vedic spiritual systems with western esotericism- which is decried by purists and applauded by many a modern mage. Opinions aside on the subject it hardly matters whether the reader even believes in the occult, because the academic, here, can clearly see a cross section of the early enlightenment period and the cosmopolitan nature present in this literature, drawing its inspiration from (and explicitly crediting some of the material to) rites and practices from around Europe and beyond.

I've now edited a great many occult works from the Renaissance and Enlightenment periods and released them, and after the translating was finished for the Petit Albert I think this may be the finest of them all.
Posted by Styxhexenhammer666 at 9:17 AM No comments: 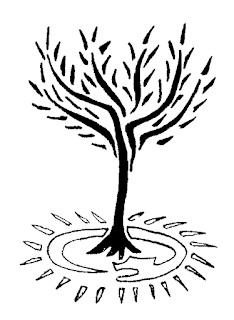 In tandem with occult material the world over, especially that from the last two centuries, there exists in the corpus of philosophical literature a vast number of (normally short) poetic and manifesto-style works such as this one which are of great note; while Sorensen (who has been falsely rumored to be Himmler, but was really a figure called Frithjov Fischer) does not speak of the occult within this work, which is only 32 pages long, it has several features in common with other works; notably those of Rudolf Steiner.

Presented as a poem but really more of a political discourse, Fischer here describes the descent from former eras after the malevolent influence of Roman hegemony (and its judeochristianity) upon Northern cultures- not just German culture as it became, but the heathen people in general. Like "The Occult Significane of Blood" by Steiner it posits a sort of tribal memory from antiquated times, drawing, though, a conclusion roughly opposite that of Steiner and his Anthrosophists- that is, where Steiner concludes that the mixing of blood in cosmopolitan cultures led to the ascent of human culture (if at the expense of tribal memory and certain tribal capabilities), Fischer denounces the same as not ascent but descent from a more moral, stronger culture in the past, to be reawakened by interpreting folk tales from the past, specifically with an eye to seeing how they relate to the here-demonified Roman Empire, and later Holy Roman Empire, and the influence of the "religion of Sinai" (judaism.) As an example, Fischer holds up the story of Snow White, likening the black queen to Rome and the mountains she crossed literally to the Alps, as Roman culture encroached upon the Goths and Vandals.

Unlike latter day, actual National Socialist philosopher, Fischer's earlier, primordial philosophical work here mentions race only insofar as it related to outside cultures which brought in alien religious concepts- telling, for example he says, the morally upright and noble heathens not to sin, when they were already free of such behavior and saw it as "below the dignity even of animals." Thus, it should not be seen as a "Nazi manifesto" or something akin to it, but rather a somewhat earlier nationalistic and romanticism-inspired look at the past, the nostalgia of which, instead, led to the adoption of Nazism. Of note here is that a nearly similar number of Germans in the same era abandoned this romanticism, adopting what might be seen as Steiner's style of thought and primarily supported communism instead- and such ethnic theorems were indeed at work as the Soviets attempted to breed non-Russians out of existence over time with a fervor indicative of the actual use of eugenics in its social sense.
Posted by Styxhexenhammer666 at 1:12 PM No comments:

Rosary of the Philosophers Now Available! 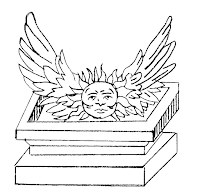 GET YOUR COPY HERE

After two weeks of waiting the files for the Rosary have been verified by Amazon- as such, it is now happily available!

This text is substantially longer than most of the other titles I have edited, at around 170 pages; it is an alchemical work with numerous illustrations to which I have added a substantial foreword. It dwells on various physical processes like mortification and sublimation and through these tells a sort of slightly veiled spiritual and philosophical story while shrouding the same in chemical references.

Quite a nice work, one of the foremost titles on alchemy available anywhere.
Posted by Styxhexenhammer666 at 1:35 PM No comments:

The Petit Albert (the Little Albert, in short) is the foremost text within the French cycle of grimoires; one part talismanic art, one part herbal and folk magick, and one part philosophical text, it derives heavily from Paracelsus- or rather Paracelsus as envisioned by occultists of the era. Most often found in its original French, the only english edition I've been able to track down is a sort of limited edition version, along with a pdf supposedly translated to English which I didn't bother to pay for to see if it was any good. There is also a sort of seemingly jerry-rigged edition compiling some of its material for "The Spellbook of Marie Laveau" which may or may not be a serious attempt at translation. Linking this legendary figure with an enlightenment era text from France, I assume, is merely a function of the French infused Louisiana tradition of her own age.

As such, and because I'm tolerably good with the French language (in writing and reading it, anyways; speak to me in French and I'll understand at best half your words) I have begun translating the text myself from one of the older editions in the original language. Strangely, of the three versions I considered, they all appear to show differences from one another; I have to assume that other French cycle works were variously intermixed with the same, and there is also the Grand Albert of similar origin which I also need to have a look at eventually.

I'm editing as I translate, which is no small task, but I've made considerable progress already; after illustrating it I may also annotate the entire work, since even after translation there are numerous terms (often also found in alchemical manuscripts) which the reader may need a further explanation of. The work is at least as diabolical as the Grand Grimoire, and possibly moreso, on par with the infamous Grimorium Verum as to its strange, sometimes dangerous content (including cooking mercury and obtaining the blood of bats, boiled frogs, and other living things.) For most of the occult works I made a standard disclaimer suffices but any time someone tells you to turn henbane seeds into incense or to make potions with cat blood something more significant is likely necessary.

I have not chosen its format yet so I can't give an estimation of its page number but I can say it's a longer work than most other grimoires.
Posted by Styxhexenhammer666 at 11:21 AM No comments: