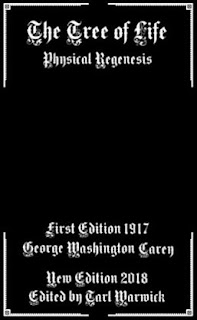 This work is the first of a number of quack medicine, herbal, and spiritualist works with pseudoscience that I intend to release this year; it's one of the strangest, suggesting overlap between the twelve signs of the zodiac and twelve inorganic materials that are used by cells (thus proving in the mind of the author, a spiritually significant connection.) Much like Dowers' explanation of "radium" and its importance spiritually, Carey likens the human being to a steam powered apparatus, with the pores as vents and other various miraculous similarities.

While thus hilarious at times, it also contains Careys' apparent post-revelational vision of utopia and a good deal of spiritual commentary on avoiding alcohol, overeating, sexual contact, and other corrupting forces in order to inevitably lead mankind to a higher plane of existence in which labor is automated and humans live a peace loving existence in visible company with angels. 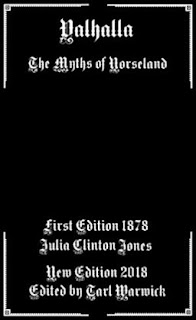 I was looking around trying to find more works which involved paganism, especially Norse or Egyptian, to release over time, and some time ago I found about a dozen good works; this is one of them, just in time for that happy point in the year where the Fimbulwinter begins to decline away!

More a compilation than an authored work, its authors main contribution is its rather helpful index, as the preface she includes is a lengthy allusion to Christendom and the then-interesting facet of classical lore that people tended to ruminate on Rome and ignore the far north- a tendency now inverted today. It is a collection of twelve Norse tales, in poetic form, all the way up to Ragnarok and past it with the Regeneration. In this respect it is a standard collection, but an important one, especially for those who keep predicting Ragnarok literally and forgetting that it isn't the end of history, just of a cycle. 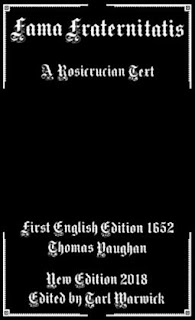 
And here it is; one of the most important works I never originally thought to release an edition of- the famous Fama Fraternitatis, first worked into English by Thomas Vaughan, that selfsame work which inspired occult changes in its own era and long after.

Containing a great deal of content in only a few pages, for someone like myself the most interesting inclusions are those which overlap it with the type of occult of Trithemius and Pontanus among others- with everburning lights and strange mechanisms and symbology. The Fama Fraternitatis formed the backbone of what was represented as an order so wise in its era that members could prolong human longevity to centuries, make gold, cure any disease, and speak with spirits. 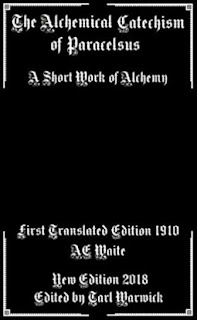 This short, sweet work is actually one of the better alchemical works I have edited, at least insofar as being easily understood in its explanations of topics within alchemy such as the inferred differentiation between the heating action of digestion (manure decomposing!), the anaerobic burn (a kiln) and open flame. It is in the form of questions and answers, and was first worked into this form by AE Waite, that madman of manuscripts himself.

Its interesting content regarding the generation of materia by the action of vapors within the Earth is a primitive forerunner to the modern understanding of volcanism and tectonics. 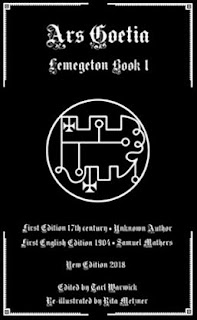 I am extremely pleased to announce that the Ars Goetia, arguably the most infamous of all demonic works, has been completed; this edition has been re-illustrated by the talented Rita Metzner and has had some changes made to its format over some editions (for example, giving each of the 72 demons its own page for ease of use; some editions place the Seals in alternating columns or put the description of the demon above, not below them.) Not meant to be superfluous and flowery but rather a functional edition, I omitted some of Crowleys' additions, which have technically nothing to do with the original literary tradition.

I am pleased to say my edition here is the apparently least expensive edition available anywhere in paperback format.

For those not aware of the content, it is summoning; specifically aforementioned demons, using a system involving a magical circle and triangle, various seals, and standardized invocations. These various grotesque demons can, the book claims, allow the Master to talk to animals, see strange visions, and generally gain power, love, wealth, and other things; the one working such rituals needs to be wary though, since some of these demons can cause illness just by being nearby, requiring a magical ring. Others are a bit less malevolent. This text is one of a number of works which was compiled into the Lesser Keys of Solomon, of Mathers and Crowley fame.

It should be noted that I intend to release the other books of the Lesser Keys of Solomon (minus the Notoria, which is not authentically part of the same period works) compiled together, but that the Ars Goetia is its own stand-alone work and needed to be released as such prior. 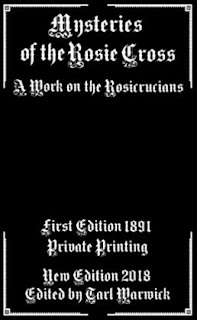 This work comes from a rather expansive (and otherwise mostly one-minded) collection of texts from the golden period of both real and quack-like academia involving occultism, from that special era in the 1890s; specifically, this is one of the better titles within the Phallism series that almost certainly was created by Hargrave at the time. Unlike most entries in that series, this one has nothing to do with symbology and everything to do with the Rosicrucians' own then-translated purported literary history, with some alchemy and other subjects tossed in. The only other entry in the series that deviates from that one taboo subject of reproductive spiritual material is Ophiolatreia (which I edited quite some time ago.)

It's quite good, actually, despite the fact that parts of it are a bit dense and difficult to fit into a linear sort of system; most of the content here was copied by the author verbatim into the work; some of that content is quite strange and fantastical, almost Atlantean. Nonetheless it is academically sound.

I am pleased to announce that at this time, the illustrations for my upcoming edition of the Ars Goetia have been completed by the artist (Rita Metzner, who has previously illustrated a couple of herbals for me.) The work is good and so far the formatting is going smoothly; the final edition should be a fairly standard length, perhaps a bit longer than some editions because I choose not to compress images to two-to-a-page so the finer lines are more easily legible. I expect to complete and release it this month; but it must be carefully done, because this is the ultimate big daddy of grimoires and will eventually be combined with the three other (authentic) works of the Lesser Keys in an edition of that as well.

I am also more than 80 pages into the Rosicrucian text I began editing in January; work has been slower since the beginning of chapter four, since now all remaining text is taken from other sources and compiled in this particular work by its author (read; it is in older English than the first two chapters with frequent quotations which are sometimes not entirely proper in format and must be reworked.)

Assuming both works are done before this month ends it will be time for a couple more herbal works I feel, and then work must begin on re-illustrating a half dozen prior editions.
Posted by Styxhexenhammer666 at 7:24 AM No comments: