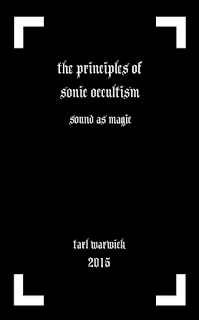 The end of 2015 is swiftly approaching and now it's time to announce the final title for the year: "The Principles of Sonic Occultism: Sound as Magic". I'm glad to have finally completed this work, which I first announced back in spring and had already completed by early Autumn, shelving the final proofreading as I worked at editing a pair of works that couldn't wait.

Most occult works which are written in modernity focus either just on history and a secular treatment of magick, or they delve into do it yourself content and have an uncertain view to actual recorded history. With this work, as with its larger cousin "Fruits of Eden" I seek to solve this discrepancy in the occult literary realm. From the Muses of Greece to modern pop music, where is the genuine occult symbolism? How do we categorize the use of occult imagery and sound in mainstream culture? What are these based on? How are they used? How does this relate to society and politics? In this work I've explored all of these concepts and more, putting it all together in a manner which I hope is both user friendly and informative.

Introduction p. 4-10
The Basic Tenets of Sonic Magick p. 11-22
The Ancient Basis of Sonic Magick p. 22-34
Music as a Psychological Trigger p. 35-53
Music and Mass Manipulation p. 54-61
Experimentation: Emotion and Sound p. 62-73
Music Evolving Over Time in Accordance with Evolutionary Principles p. 74-77
Source or Conduit? p. 78-86
Self Manipulation Versus External Manipulation: The Muse and the Berserker p. 87-97
Speech as Magick: Hitler and the Principles of Elocution and Charisma p. 98-109
The Harvest: Paranoid Predictions As a Beacon p. 110-119
Real Versus Fake Occult Sonic Ritual p. 120-122
Conclusions, and My Experimental Sonic Results p. 123-130
Posted by Styxhexenhammer666 at 4:06 PM No comments:

Rosary of the Philosophers Update: Illustrating Begins... Notes on Alchemy 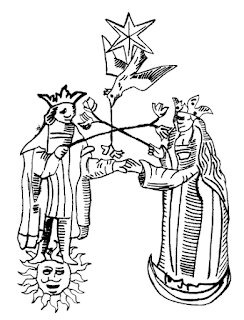 One of the illustrations present in the Rosary of the Philosophers.


Illustrating has begun for the Rosary of the Philosophers and is now approximately half completed. Many of the woodcuts present show the typical Sol and Luna being combined; the process by which the philosophical (alchemical) arts are completed. The work explains that for both pure sulfur and pure mercury, the solar and lunar element are present; in sulfur the physical outward appearance is that of the sun while the inward, hidden mercurial element is its true nature, and likewise the reverse is true for pure mercury, argent vive, in which the solar element is hidden within, while it presents its lunar, silvery nature tangibly.

It should be noted that alchemy and most alchemical works (including this one) are essentially steganographies- the foliated earth so often alluded to here is nothing more than organic material (compost) that has been leeched of its saltpeter content, such that the nitrates begin accumulating as a crust upon its surface- a process in altered form used in the production of the base matter from which gunpowder was and still is made (black powder, that is.) A true alchemical secret since such acts were, in those days, little other than wizardry to most.
Posted by Styxhexenhammer666 at 7:04 PM No comments:

The following is a general (and malleable) list of the releases which will be featured here on this blog courtesy of yours truly, and some of my general plans for the next year or so in my writing, editing, and illustrating. (One of my subscribers confirmed the good overall quality of the Grand Grimoire re-release; which is pleasing- I figured the end result would be a much more polished release worthy of the amount of sales it gets.)

1. The "Rosary of the Philosophers" - Originally translated into English in the 18th century, this somewhat longer work is alchemical in nature and is nearly edited as we speak. It will be the last or second to last work I release in 2015 (My work on sonic occultism is complete and needs illustrating only.)

5. A re-editing of the Grimorium Verum and Black Pullet, specifically for illustration purposes. Added to this, adding the formerly absent illustrations to several prior works.

6. Several of my own works.

7. Any new alchemical texts I can get my hands on. I have copies of one of Paracelsus' and one of Plotinus' work as well. If time allows I want them done and available by mid 2016.

I still need to acquire more occult works and as always will investigate any occult texts related to me; the limitation of the internet in searching for physical works especially is limited, unless one has a substantial budget- the work of creating inexpensive but attractive occult releases is made more difficult, oddly, by the lack of availability of inexpensive copies of these same texts, and I am in some cases forging a trail that is difficult to forge.
Posted by Styxhexenhammer666 at 2:23 PM No comments: