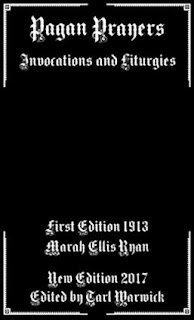 This short work was, in its original format, over 120 pages in length- so it is almost as important as an example of the strangeness of early 1900s book formats as it is a guide to some liturgies, prayers, poems, and rituals of pagan groups.

Marah Ryan's compilation here is derived from other sources and includes material from the Egyptian, Persian, Navajo, Hindu, and other paths; in most cases for this edition the Old English style of the prayers themselves was left intact because it had already been translated and transcribed and correcting it, if necessary to begin with, would have required the original sources. A fine collection of short pieces from these cultures- especially the Egyptian prayers and invocations. 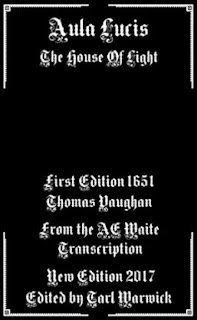 This short tract was created in the middle of the 17th century- as a work of mostly physical alchemy, it's better than most, at least in terms of being understood; all alchemical works contain veils, metaphors, allusions, but Thomas Vaughan's work is less so than many. It alludes to the philosophic fire spoken of by Pontanus (literally, a heap of composting manure to supply indirect warmth without flame) as well as other topics.

It's been a busy last couple of weeks; the Ars Goetia has been completely edited and my illustrator has the plans for illustrating so it may not be long before the most infamous of all grimoires is released in a decent and inexpensive modern edition. In other news, I completed a short alchemical work yesterday entitled "Aula Lucis"- it's only 25 pages in length, but Thomas Vaughn did a very good job of generally being clear and not veiling his mostly-physical alchemical lore.

The new editing project is a compilation of prayers and invocations simply entitled "Pagan Prayers" and crafted at the dawn of the 20th century by Marah Ellis Ryan. The original format of this work is horrendous and half the pages are basically empty save for the titles of the subsequent very short prayers. The work will, due to major formatting overhaul, be reduced from about 120 pages to 40 or 50.

As before, Morbid Stories II is approaching the end of its first phase of development; the titles and rough outlines. These works involve my usual practice of entering a slightly berserker-like state where I am not completely aware of my writing and am mentally fixated on imagining the horrified reactions of people I dislike being forced to read the bizarre, grotesque stuff repeatedly. I am considering the possibility of compiling together all of the new entries with the old ones and splitting the categories themselves in half- thus technically MS II will contain some older entries while MS I will contain some new ones. Since I have to reformat the first volume, I will have to resubmit all the files anyways- I am considering the possibility.

Altogether this end year period will be full of work!
Posted by Styxhexenhammer666 at 7:09 AM No comments:

It's finally that special time where I get to make a major literary announcement again; after completing my two short planned works last month it was time to move on to something I have spent two years delaying- an edition of the Ars Goetia (which will be joined by the Theurgia Goetia not long after.)

I have already begun editing the text of this work- it isn't all that difficult; the edition I plan will omit the critical commentary and institute a few entries of my own (it's always important to note that "N." stands for the name of the spirit within invocations, for example) and an expanded foreword. Since it will require full illustration well beyond my means I have contacted my usual artist for its eventual completion. Altogether it will be full length but since my goal is to hold the price down I will do what I can to keep the page length under the apparent threshold for Amazon to take it from the 5-to-7 dollar range up to the 11+ dollar range which is achieved by adding at most a dozen extra pages of material.

I have also compiled most of the entries for Morbid Stories II. I will release it as soon as it's done and re-edit MS I to share its same format.
Posted by Styxhexenhammer666 at 9:45 AM 1 comment: