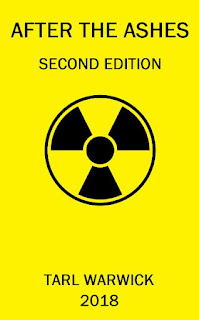 This work is one of my own authorship; a page compilation of remarks on survival, philosophy, politics, and planning- it goes beyond the normal survival works which provide lengthy how-to instructions or lists of prepping supplies and delves more into the unorthodox side of nuclear war; for example, while nuclear weapons are terrifying, even worse is that hundreds of nuclear plants would melt down after such a conflict and release massive quantities of far worse radioactive material regionally, poisoning the entire world for centuries.

From dealing with corpse removal to decontaminating soil my hope is that if a nuclear war does occur, this guide can save a few lives- maybe even a whole society.

Coming Soon: After the Ashes and Psychedelic Spirituality!

Since I still do not wish to continue editing without great caution I have been feverishly improving one of my own authored works; "After the Ashes" (originally from 2015) now, I think, considerably better. I redacted a few dated portions and replaced them with updated info (for example, North Korea had atomic but not hydrogen weapons in 2015!) and reformatted it. I am now working on the cover and tomorrow or the day after it should be ready; the second edition! I'll keep the first available as well. It runs 119 pages.

Next up planned for around mid July then is "Psychedelic Spirituality"- this work of psychotropic lore contains some anecdotes from my own former shamanistic dabblings, a general list of mind altering substances of note, and some political material associated with psychedelics and the drug war/temperance. I imagine I'll be adding a section or two to this one.

After that I plan to write a couple dozen new morbid stories and split the initial work in two. The 6x9 format currently used for that edition doesn't look right and it would end up nearly 400 pages as a 5x8 work, which is a nightmare to format properly as far as trim goes. Releasing MSI and MSII as a split work with a dozen new entries per edition makes more sense.

Every other work I have personally written will be re-released in a new format except for the five occult works I already did so for last year.
Posted by Styxhexenhammer666 at 6:54 AM 5 comments:

My Next Literary Projects

Now that Createspace has stymied my attempt at revamping and improving my older releases by temporarily suspending my account and shutting me out for a week based on their own systems' error regarding copyright status, it's time to move on to a pair of new literary projects. I've already emailed them regarding my suppressed titles but I haven't gotten a response yet so it's even odds as to whether they respond at all at this point. I heard at least a rumor that Amazons' new KDP-to-paperback system (currently in beta) is meant to replace CS altogether in due time, which might explain all these issues.

The first project is an extension of the former one and involves re-editing and reworking some of my own self-titled works like "Psychedelic Spirituality" and "After the Ashes." In some cases this will involve adding new material to them; I have a few extra sections in mind for both of those. Five of my earlier booklets were already improved last year so the list of works is about a half dozen.

I am excited to announce that the culmination of this work will likely bring forth a slew of new works of my own authorship also; Morbid Stories II and a couple of booklets I wanted to release on political topics.

The second is to persist at my editing project using some other service for the next fifty works. Since I might end up losing several thousand dollars a month in income for no actual legitimate reason if I load anything else onto CS, there's no reason for me to put anything there that I am not specifically the author of whether or not I can prove its status since it is no longer immediately clear that I have a line of communication with their service to begin with. They even changed their site so you could only access their help page if you were logged in (forcing me to register a second account just to grab the number.)

If any of my readers here happen to know of any createspace-esque on demand publishing sites that do not require any form of fee and merely take a cut of the profits, I'd be interested in seeing them; I relied on CS so much that I never really considered alternatives.
Posted by Styxhexenhammer666 at 5:58 AM 4 comments:

After an entire week of having no access to my sales (which obviously were lower during that period and will remain slightly lower than normal until my titles hopefully get unsuppressed) Createspace has removed the temporary suspension that was active on my account. This means the next order of work is to go through the tedious process of proving to their validation team that I possess the rights to sell copies of works I had already been selling for several years.

Right now, the Grimorium Verum, Philosophical Merlin, Semiforas and Schemhamforash, and Book of Alchemy are suppressed and I have submitted evidence of their status. Two other works I will just leave suppressed because they are 1. insignificant and 2. the original evidence I used to show their public domain status when I uploaded them years ago is no longer on the internet.

Of all the works which Amazon suppressed in error the Grimorium Verum was the most significant.

The Sepher Bahir passed their review as did the Sepher Yetzirah. Oddly, these two works were the ones that got noticed enough to get my account suspended. The former is available, the latter will be once the files fully process.

The email I got in response to my successful "reinstate me please" response admonished me as follows: "Please note that your future submissions may be subject to additional review prior to being published. This may result in a delay in publishing." That's rather sad, because it means I will presumably only be an author from now on rather than risk editing public domain works and getting kicked off entirely despite breaking no rule or law.
Posted by Styxhexenhammer666 at 9:31 AM No comments: