Several works have to be mentioned here, and as such it made more sense to make a general literary update rather than individual posts for works.

The first announcement is that I have begun editing and reformatting Morbid Stories for a new release. The original had a somewhat outdated format and suffered from that, and I'm conducting a second proofreading as well, for the few grammatical errors which existed therein. This second edition will contain at least some new content also but is already full length.

The second is of course the second edition of The Occult Basis of ASMR which is coming through- I have already edited the work but have been temporarily holding off on the cover art and its release to edit Morbid Stories.

The third is long-awaited by some; at long last I feel it's time to compile, edit, and rewrite Sickness in Hell into what it was always meant to be; anyone who enjoys Morbid Stories will want to get this work- for it is the crude predecessor to the same. For those not already aware, I began writing Sickness in 2007 when I was still in High School, but never completed it- it was roughly arranged into chapters, which skipped around a bit and contained mostly a mix of humorous and exceptionally violent material related to one Germaine Woodsworth and other characters who were mutated by corporate food products and ended up making a pact with Satan among other things. I won't reveal too much of the plot now since it's still malleable. The basic concept, though, is already done and was by 2009 when I switched to the shorter, less structured morbid stories I had written.

The fourth and final announcement is that I intend to translate, edit, and release a version of the infamous grimoire of St. Germaine, the Trinosophia, by July.
Posted by Styxhexenhammer666 at 3:50 PM 1 comment:

Paracelsus - The Aurora of the Philosophers: Now Available! 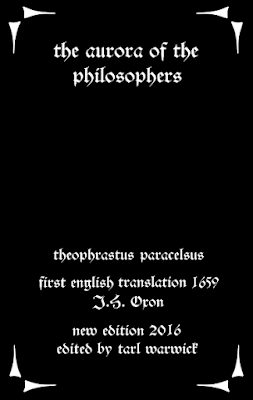 Originally rendered into English by the 1600s, the Aurora of the Philosophers (or Monarchia) of Paracelsus is one of the foremost of all alchemical works ever created.

This particular work is of note for two reasons. First and foremost, it covers the ancient history of magick according to Paracelsus, as derived from Persia, Egypt, the Chaldaeans, and Hebrews. Second, it supplies hands-on experimentation where the vast majority of works supply only theory. For obvious reasons I in no way condone or encourage the working of any experiment in this work.

It additionally refutes some of the then-common myths regarding the work of alchemy in rather good detail.

Email ThisBlogThis!Share to TwitterShare to FacebookShare to Pinterest
Labels: alchemy, alchemy book, chemistry, esoteric, how to do alchemy, how to do magic, mysticism, occultism, paracelsus, paracelsus book, witchcraft

Psellus - On the Operation of Demons: Now Available! 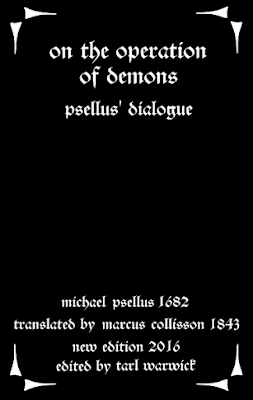 At long last here is one of the best works I have read and edited. Originally translated from Greek to English by Collisson in the mid 1800s, Psellus' Socratic-style dialogue covers all the basics of demonology and then some in a compact form.

I definitely recommend this work to those who intend to delve into anything related to summoning or studying the demonic- the categorizations are all here (although some who believe in demons may not agree with the categories given.) Loosely speaking, we have here a reference to the concept of airy spirits as spoken of in other works of the era; elsewhere they are often regarded as natural, rather than demonic, forces. Psellus also alludes to the use of psychotropics in demonic possession as well as dementia but never quite regards them in their modern, secular form.

Once I realized that the little manuscript I penned regarding ASMR as it related to the occult realm was actually being digested by more readers by far than some of the grimoires I have edited over time, I decided that it was high time to improve its format (and, dare I say, primitive cover art) and add new material which I have amalgamated on the subject on my slow journey through occult literature.

It's not that the original work is wrong or lacks content- quite the opposite, it seems to have been remarkably well received, but since I released it I have made my way through several dozen new works, and that only includes those that I chose to release in editions. That doesn't even come close to the number of works on the occult and in the occult that I've read as research and for my own interest that are more recent or which I haven't edited yet.

I've already proofread and reformatted the work into a better condition- several new sections and a prelude to the second, edited version will be added, as well as perhaps a section of notes, possibly including a laundry list of occult works which have some relation to the topic of autonomous sensory meridian response. Since at least two new segments have to be added it will be somewhat longer than before, which I imagine will be welcomed by those who wanted a bit more meat on the bones to flesh the core idea out.

I have other updates coming down the pipeline also; I'll be releasing an edition of the famous Trinosophia among other things.
Posted by Styxhexenhammer666 at 8:21 PM No comments:

A Twofer! Coming Soon: Aurora of the Philosophers and Operation of Demons

Two literary materials (both fairly short and quick edits) will soon be available and will be posted here, presumably on different days; Paracelsus' extremely good "Aurora of the Philosophers" and Psellus' "Operation of Demons."

The first text, by Paracelsus, is partially philosophy, partly how-to, and partly warning to the reader to avoid alchemical charlatans- counterfeiters especially, using various chemical means to make fake currency. The philosophical content includes a deep and rather insightful analysis of the origins of magick itself- not merely alchemy.

Psellus' work ruminates through a Socratit dialogue on the topic of categorizing demons: What are they? What do they appear as? How many categories of them exist? It also provides an amusingly modern explanation (without meaning to) of the force of possession, attributing one such case noted in the text as the result of some sort of hallucinogenic drug. This work was already translated into English in the 1840s and needed precious little actual editing beyond a foreword to explain the work, new formatting, and some de-antiquation of a few lingering archaic references.
Posted by Styxhexenhammer666 at 2:03 PM No comments: 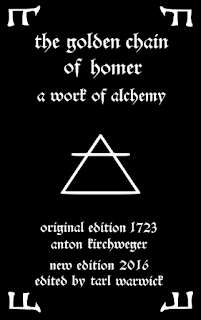 When works of alchemy are made, mostly they fixate on obscure philosophy- the only exceptions I have encountered are this work and some of Paracelsus' materials. The Golden Chain of Homer, however, is explicit and describes actual alchemical experiments and their recipes.

For those interested in alchemy this work is highly recommended; it may be seen as a somewhat dense but spectacular overview of the philosophy and the working of alchemy itself. Disclaimer: I in no way endorse the practice of these experiments.

When we discuss alchemical texts we are most often reviewing elaborate systems of symbolism involving celestial and other phenomena. With the Golden Chain of Homer, this is assuredly not the case. Of middling length, (64 pages,) the work ruminates far more on the actual chemical processes behind alchemy; humidification and distillation especially. "Released" (and almost surely written) by Anton Kirchweger in the early 1700s, it was first worked into English not long after by Bacstrom, although the text was not strictly full length in this work. To keep with proper tradition, it is this "shortened" manuscript which I have edited.

Unlike most works, which provide theory without practice or philosophy without physicality, the Golden Chain includes several literal experiments (which I do not condone the working of, for legal reasons!) including a rather strange experiment in which sterilized sediment is used to grow "plants" (almost surely mold)- a telltale sign that the work predates microscopy to a great extent.

I definitely recommend this specific edition for those interested in alchemy, along with a shorter manuscript on the Aurum Potabile which I have just finished editing but must format and work through the cover design for.
Posted by Styxhexenhammer666 at 12:26 PM No comments: