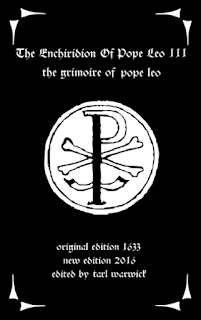 Somehow I managed to complete the Enchiridion of Pope Leo III without actually posting here about it being done; I have no idea how I overlooked it- perhaps I was drinking a bit of wine when I finished uploading it. I could have sworn I posted an entry but was wrong.

The work itself is quite good; I refined the original illustrations here because they were nowhere present in a quality high enough for use- in some places this meant largely remaking them digitally- easier, arguably, than my prior methods.

The content is largely talismanic after a sort, based upon the use of certain prayers combined with pentacles crafted for wearing, for various results; mostly protective. Strangely, though, the Enchiridion (at least this version) also contains, at the end, a literal rite for summoning Satan, renouncing allegiance to Christ, and binding oneself to the Devil in the most literal of manners. I have read several versions of this grimoire and the Satanic pact appears to be original to the oldest variant, with most newer variants omitting it (possibly due to the fact that such a passage is utterly out of place when compared with the angelic material of the rest of the work which has more in common with the Almadel than with devilish works.) I chose to retain this rite, however, both because it is interesting to me and likely to be so to the reader.

It's quite a good work overall.

The True Red Book of Appin As a slightly amusing aside to the my (growing number of) readers I hereby offer this little book to the world; the True Red Book of Appin, the grimoire of Vlad the Impaler, the grimoire of Empires.

It is quite possible that the more astute reader, having studied the concept of steganography, will fully understand the nature of this work- for others, it serves as a particularly well designed occult work which will allow the reader to delve into some of the Renaissance-era folk traditions of not-quite-civilized Europe.

In the not so distant past others have released work in the mighty name of Vlad Draculea and attempted to convince people that, somehow, he was a demonolater or a devil worshiper despite his rather deep Orthodox spiritual leanings and his great pride in the title "Son of the dragon", taken from his father, who was quite literally part of a secretive and elite force of Orthodox Christians gathered together to stave off the invasions of the islamic world in a time when the Ottoman Turks controlled a land area greater than that of their Byantine predecessors and essentially as great as the Eastern Roman Empire before it went into decline. It didn't help that Vlad and others were still fighting with swords and crossbows well into the period of cannons and gunpowder.

Nonetheless, one cannot easily separate Renaissance era spiritual Christianity from the occult, because indeed the two were inseparable altogether; from the laypeople and peasants practicing folk magick to the royals, nobles, and clergy with their more elaborate ritualism.

The reader may determine for themselves the nature of this work.
Posted by Styxhexenhammer666 at 8:10 AM No comments:

Thanks to my new illustrating system it's somewhat easier to create substantially better-quality illustrations for my works and as such it should be fairly simple to re-edit a couple of the older works I've released and bring the illustrations there up to my new standards. I took a look at the Grimorium Verum and determined that its own images were actually fine, which surprised me because for some reason I remembered one of them being crooked, as in, the hand drawn, scanned and digitized image seemed slightly "off" to me. Somehow, it was my eyes playing tricks on me.

Going forward into April I'll be taking a week or two off at that time to relax and will be doing very little work; I have my own (fortunate and happy) things going on at that time and it's about time to take a quick breather so I can get back into editing and writing mode for the summer.

Before this happens I intend to edit and release the Fourth Book of Agrippa; I've already reformatted and half-edited my way through it (it's not a very long work) and merely need to illustrate it thereafter. Once that's done, I have to re-edit and re-release two slightly poorer-format editions I created fairly early on in my editing streak, and I should probably retitle the Enchiridion, since it's apparently better known as the grimoire of Pope Leo, not the enchiridion, it therefore makes sense to switch the title and subtitle for better overall attention from the occult-buying literary audience. If I have time to do so, I want to release an edition of the middle-length Clavicles of Solomon as well. This will require far more extensive artwork so it may take a while.

After my quick April break it's onward to a slew of new releases; several by Hollandus, the three (true) books of Agrippa, the five books of the Lesser Keys (individually, I plan a complete critical edition some time thereafter), and an extremely interesting book called Napoleon's Oraculum. This fortune telling system is similar to the Philosophical Merlin, the latter probably being partly based on the same.

I intend to also re-edit Fruits of Eden; I was satisfied with the final result as apparently were others but I'd like to redesign the interior format of the images. I have ideas for many fiction and nonfiction works also in my head waiting to be written.
Posted by Styxhexenhammer666 at 6:12 PM No comments: