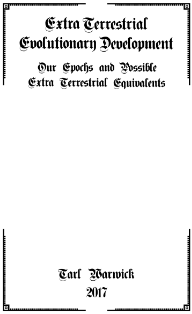 
This is the final manuscript I had planned for March; two days early! Its content contains three essential points of note, combining different fields of theory to draw conclusions from their fusion (the main source of authentic occult knowledge, no less.)

First, that human development is largely able to be categorized into four and, soon, five epochs, using communication and focus as limiting factors.

Second, that extra terrestrials, which of necessity exist in competition along evolutionary lines, probably show similar responses to similar long term stimuli in their surroundings.

Third, that acknowledging these, a variety of conclusions about their likely features and behaviors can be drawn; simultaneously, we can predict the general form of the fifth and sixth human epochs to come. This work then combines linguistic anthropology, genetics, and exopolitics as well as robotic ethics. 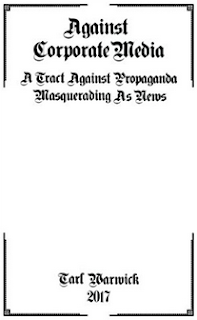 The third March manuscript I have constructed; a short tract detailing the evolution of, slow degeneration of, and various vices of, corporate media firms and their chosen platforms- their difficulty with the internet, their corruption and their fiscal and political backers' excuses for their constant propaganda.

Exposing truth is the best way to see that it is perpetuated; I am not satisfied with merely pointing to these things on the internet and decided the best way to further promulgate my ideological case against the MSM was through the use of a physical manifesto of sorts. The case I make here for resisting online censorship, decentralizing information dissemination, and ignoring corporate media is to the best of my ability succinct and complete. 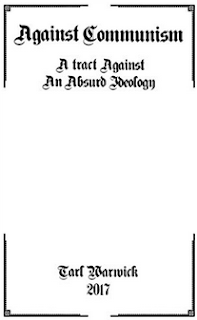 This short work is a pogrom against communism, as well as its various offshoots and "allies"- anarchism, socialism, and so forth. I could have written a 900 page manifesto against the ideology itself with ease but figured that wasn't prudent.

Communism is best attacked not with vague moral arguments but with an eye to evolution and biology; paired with an observation of its brief and violent history over the last century, communism is just another pile of trash in the garbage heap of non-working systems.

I am approaching the end of two new short political works; "Against Communism" and "Against Corporate Media." As promised I have two other political titles I plan to release as well this month. I have decided to break apart my efforts into segments over the coming months also. April will be herbal month; two and possibly three new works will be edited then. In May, it's time to return to grimoires and work through the Ars Goetia (as a stand-alone release) and to begin working on the other books of the Lesser Keys. A modified version of my Ars Notoria will be wrapped up into this bundle.

June and July will bring a slew of psychic works and a new literary category. After that, I plan to return to my own titles and begin hammering Sickness in Hell II out.

These plans are malleable, but the year ahead looks like some good stuff.
Posted by Styxhexenhammer666 at 11:28 AM 1 comment: