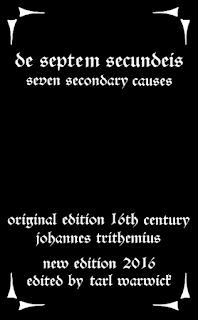 Based on what I've read of Trithemius' work, he deserves to be celebrated far more than most may give him credit for. Known predominantly for Steganographia he also penned two other works of note; the Art of Drawing Spirits into Crystals (which I intend to edit and release) and this work, De Septem Secundeis which is an almost stereotypically Da-Vinci style prophetic work of sorts made long ago in order to note the past and draw conclusions about what was then the future (now, though, this era is also past.) A small amount of effort allows the reader to apply the same angelic system and its predictive capabilities to any era, including the modern one, as I speak of in the foreword itself.

At forty pages, it is a relatively short work, but exceptionally dense, covering several thousand years of human history and numerous changes of governance and borders.
Posted by Styxhexenhammer666 at 12:05 PM No comments: 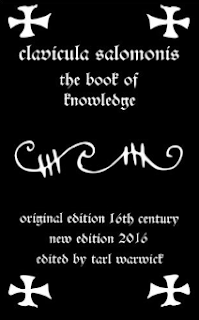 At long last one of the most important grimoires has been edited and is now available for purchase- the famous Clavicula Salomonis.

The problem with such a text is clear; multiple manuscripts with similar content compete for the same title, including conflated works and variants of older versions. I chose to stick with just one of these original manuscripts, although I do intend to include content from Sloane 3847 in a future release which will be longer and more "complete" in the sense of containing work within the same general tradition. This latter manuscript, of course, is labeled "The Clavicle of Solomon as revealed by Ptolemy the Grecian."

The work's content is part based on symbols and pentacles and partly invocation- the latter is primarily a series of conjurations and commands aimed at spirits to cause them to do the bidding of the master- the term used here for the conjurer or sorcerer himself. It is only partially diabolical, much of the content being designed not to work evil spells but to prevent harm to the master while conjuring.

For those who prefer a little bit of history and intrigue with their occult references and celestial nomenclature, this is a pure gem of the mystic literary world.

Trithemius is best known for his Steganographia, but he penned several shorter, less well known works, including this work here, which refers to the history of the world (as envisioned by Renaissance era christians!) as being split up into mathematically stable periods of time, each ruled by one of several angelic forces, each also representative of a celestial body; Anael, Raphael, Gabriel, and so forth. Each of these forces has its own nature during its reign, and Trithemius compares historical events within each of these periods to the same- noting the changing of rulership, the development of culture, and the rise and fall of empires.

In the near future I will also edit and release two of Trithemius' other shorter works; the Steganographia will have to wait for the future, being a true "full length" manuscript.
Posted by Styxhexenhammer666 at 8:58 AM No comments:

Coming Soon: The Clavicles of Solomon

At long last I decided to begin the process of editing the Clavicles of Solomon, one of the most well known of all occult works, especially from its era.

The content is essentially a bit like the Little Albert- which is not a bad thing, except that the Little Albert is from the French cycle. It covers all of the usual folk magick suspects- obtaining love, and so forth, and often has similarities to some of these other works. It also contains a number of pentacles and other elaborate illustrations.

One problem I have encountered with some occult works (and this is no better illustrated than with the Clavicles here) is the prevalence of multiple variations upon each work- therefore there are about a half dozen recognizable variants of the same work containing different material. As I continue editing I may attempt to mesh the content of the two best versions of the work together, or I may indeed separately edit both since they are wildly different- different enough to stand as separate entities altogether.

This text refers to the person practicing the rituals as a conjurer- in other contemporary texts, exorcist, carcist, or sorcerer are all also used.
Posted by Styxhexenhammer666 at 7:32 AM No comments:

A Manuscript of Alchemy: Now Available! 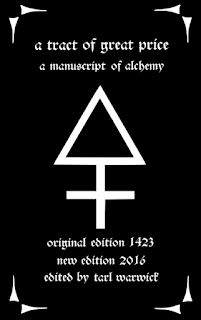 Another text on alchemy, this time rather short (only 26 pages) but well worth a read anyways. Written by some unknown "German sage" many centuries ago, and like the Chemical Art, it is partly philosophical, ascribing natural forces, especially the action of the sun on mountains, deep-earth vapors, and other movements and forces, to the creation of gold and silver within the planet's crust- indeed, the basic premise spoken of here is astonishingly not unlike modern explanations of volcanism and plate tectonics.

I believe that the tract is steganographic, and that the underlying but veiled meaning of the entire treatise is that alchemy, as physically described by quack alchemists in the Renaissance, does not indeed work and can only create a similitude of naturally occurring substances, almost literally begging the reader to go into the mountains to mine veins of ore which may be revealed by the presence of rifts and holes where hollow areas have become uncovered. Either way, philosophically it is an extremely important if vastly underrated work.
Posted by Styxhexenhammer666 at 1:32 PM No comments: 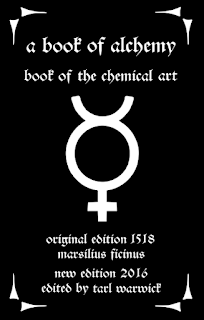 Now we come to an important (and well made) philosophical treatise regarding alchemy, one all the more easily appreciated because it gives us a snapshot of the Renaissance, courtesy of Ficinus, and the opinions given at that era concerning alchemy as it related to what was, even then, considered folkish superstition. Specifically refuting some of the more physical aspects of court alchemy (insofar as it was used to crudely make artificial "gold" from other materials) as well as some folk magick, the work applauds and supports philosophical alchemy.

It ends with a short tract created when one Illardus supposedly held council with Satan through the use of necromancy- this final passage was almost surely tacked on at some Renaissance-era date to the rest of the (more philosophical, anti-superstitious) text.
Posted by Styxhexenhammer666 at 1:16 PM No comments: 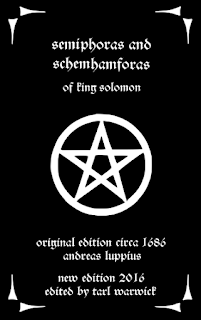 Now we turn to a work by Luppius; this time a lesser known gem of the occult literary world, usually combined with the Books of Moses into the same sort of philosophical bundle.

The overall system here is largely categorical and related to Judaist mysticism; it classifies the names of the Hebraic God, the names of his subordinate cosmic forces, the names of different stages of paradise, and so forth- through studying this work and praying fervently a person is capable of using, then, a series of incantations and prayers to protect themselves and do all manner of other powerful things. It has a great deal of similarity to the Ars Goetia in its classifications but provides no seals or sigils for the same, as they are unnecessary. 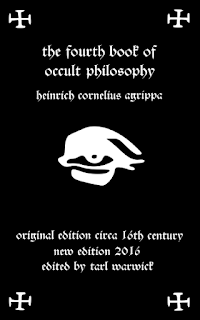 One of the most important of all occult works of note takes the form of a dubiously attributed manuscript which claims to have been created by Agrippa in concordance with the three prior Books of Occult Philosophy. Certainly not actually of Agrippa's own manufacture, it nonetheless coincides with parts of the same three-book philosophy and extends from it in such a way that I imagine the actual author must have been a most fervent disciple of the same general path.