Is the Devil a Myth: Now Available! 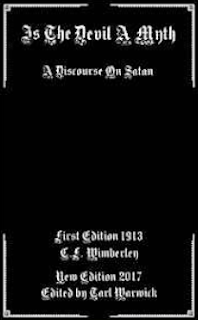 This work is a combination of demonology and devil lore with then-modern political and social discourse. Dwelling on the titles of, powers of, and form of the Devil, Wimberley's work also touches on temperance, the evils of illusionists and mesmerists, and the spiritualist movement.

It isn't quite as dense and difficult to comprehend as some similar works of the era on this and other titles; a refreshing fact, since some manuscripts on demons delve into minutiae or linger on quasi-medical topics associated with possession. It should be noted that Wimberley was surely a rather zealous protestant and so the work reflects this fact.

Alright everyone, I am steaming through a new work (one that will fit in the demonology category) written from a strictly christian perspective; "Is the Devil a Myth?" by Wimberley, an early 20th century writing of note within the realm of then-modern Victorian philosophy.

I have finished editing my two herbals; what then should I do? Part of me wants to set a couple of days aside and just illustrate them; as for having someone else do so, I'd feel bad not paying a decent total for the work, but these two minor titles are not likely to become large-scale in sales, and I could at best pay a pittance and justify the artistic work by putting the name of the artist on the work- I've had numerous people offer to illustrate for free but, it just doesn't feel "quite right" to take such an offer, even if the work would probably be better than what I can do.

I think I'll illustrate the works myself- it's just a matter of setting aside time to do so when I feel more artistic!

As for forthcoming works, I have acquired another slew of titles to edit and crafted several outlines for more works of my own manufacture, including one about a developmentally arrested caveman and his family and their adventures.
Posted by Styxhexenhammer666 at 11:56 AM 1 comment: 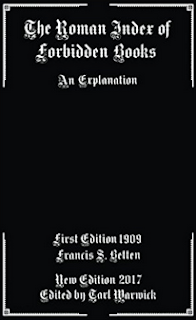 It should be said in the interest of full disclosure that this is definitely a Catholic-made and pro-Catholic treatment of the churches' old style tendency to forbid (and later merely reprove) literary works on a theological, ethical, and political basis. However, that does not render it uninteresting; the index here alone for its era of manufacture (of a large number of works the index listed at the time) is fairly good fodder for those who want to obtain material the papacy found objectionable; notably Darwin's work and a great deal of philosophical material. Oddly, this very work refutes the idea that the index provides any help to those seeking to read "anti-catholic" materials.

It goes through the elaborate process used to determine whether works shall or shall not be forbidden, and the spiritual implications of authors who accept or refuse the judgment, as well as listing the reading of such material as a potential mortal sin, as long as enough of it is absorbed. 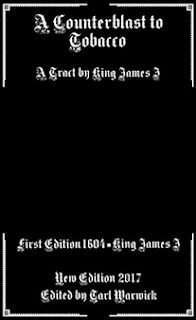 This exceedingly short tract is of note for two reasons; its author and its early date for the content. Crafted at the dawn of the 17th century, it is the first anti-smoking tract, and was penned by none other than King James I himself, of "Daemonologie" fame.

Dwelling on both the humors and then-modern medical lore as well as the spiritual implications of smoking (it being according to his view a sin on several levels), the tract attempts to convince the population of James' time and lands to give up smoking except as a limited medicinal material, sarcastically declaring it miraculous that the same plant can cure sometimes congenitally opposed conditions.

I have decided to fixate upon three medically related works for the month of April and, once they are done (could be soon, I might have to pay an illustrator, I'm tired of slowing my work down to draw up, scan, format, and re-edit interior images!) I intend to begin working on another manuscript of my own composition on the topic of robotics, automation, synthetic life, and similar topics.

These three works are summarized:

1. Weeds as Medicine: A government-crafted tract on the medicinal use, form, and habit of several dozen species considered at the time to be pests nonetheless worth harvesting to supplement the income of farmers. Things like foxglove, poison hemlock, and yarrow are mentioned here.

2. Valuable Herbal Prescriptions: A work I had already edited in January but never illustrated; a homeopathic work of sorts, combining the design of a short herbal into a medicinal form for basic remedies.

3. Counterblast to Tobacco: An extremely early public health manifest against smoking written by the infamous King James I, of "Daemonologie" fame, the lord of the burning times themselves.

If any artist I pay to complete the illustrations for the first two works quickly I may indeed also release the South Sea herbal, which at first appears freakishly short, but is actually about as long as the others, and merely in an old, compacted form as many herbals were prior to the enlightenment.
Posted by Styxhexenhammer666 at 7:38 AM No comments: