It's time for a rather short update here as one of the most major occult works ever compiled nears completion- in the case of my edition, it is about 90% done as of now. The infamous Lesser Key of Solomon!

1. The Foreword is written, the Ars Goetia, Ars Paulina, and Ars Almadel are formatted with their new settings.
2. I am half done with the rough format of the Ars Theurgia Goetia.

Since I am slightly ahead of expectations for the end of November it should be done by the middle of December giving people time to grab a copy for Yule if they wish- but as always, I can't promise that because sometimes I get busy with side works!
Posted by Styxhexenhammer666 at 9:05 AM No comments:

Our first and most major update right now involves the long-awaited Lesser Keys edition I have been planning. The Ars Goetia and Ars Paulina are already finished and have been previously released in stand-alone form (every one of the LK books is itself a separate document; the LK itself is a compilation of texts following a tradition, sort of like the apocrypha usually being presented in compiled form.) As of Yesterday the inordinately short (nine pages in modern format) "Ars Almadel" is also complete. This work cannot be released on its own due to length constraints (the minimum page number is, I believe, 22 on Amazon) but will be compiled with the others.

That leaves only the Theurgia Goetia- it is a somewhat more complex work similar to the Ars Goetia, and contains a huge number of illustrations. I will have to toy with format for this work, since once done all four have to be in the same style 100%. It will definitely be done before the Christmas season begins, probably by the first week of December.

After that I managed to obtain two of the missing phallism works and will edit and release them after the year changes over- after the Lesser Keys I am taking a few weeks off from editing to compile some more source materials and roughly format them in a large batch, to make subsequent work easier and more formally standardized.

An example of the seals in the Theurgia Goetia. Courtesy of the illustrator, Rita Metzner.
Posted by Styxhexenhammer666 at 6:22 AM 1 comment:

The Mystics of Islam: Now Available! 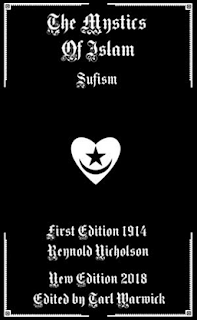 This is a fine work from the golden age of academics when books treating on non-western groups weren't full of nonstop "noble savage" mythology which had been common before and has become common again in our current intellectual dark age. Dwelling relatively little on the whirling dervishes and the more well known practices of some Sufi orders, it instead focuses on some of its historical subgroups including certain libertine factions and some groups which essentially equate to a form of islamized gnosticism. Altogether extremely well written with a decent bibliography to boot.