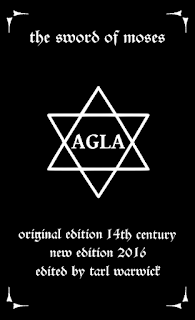 Now that Amazon has separated my (utterly different) edition from the original Gaster edition of this text, the Sword of Moses is at last available.

The use of the Sword itself, which is a simple conjuration, in combination with various other sacred names listed in the book, is meant to allow the user to do many mystical things; destroy animals with incantations, heal sicknesses, make others sick, cause crops to grow, rain to fall, rain to not fall, storms to come, storms to leave, and neighbors and lords to look upon the conjurer with favor.

This is a tiny sampling of the actual rites listed herein; even though the manuscript is rather short (47 pages in length) it contains nearly as many uniquely identifiable spells and conjurations as some works that run for several hundred pages. In no instance are any of the shorter spells more than three or four sentences in length, describing first a sacred word and then some ritual act or object associated with them. I give here one of the many as an example:

"When injured or hurt by a weapon, so that it may not fester or rot, say name #36 over white naphtha and rub it over the place of the blow." Name 36 is then listed with many others in the final section I have added; Gaster omitted the sacred names as do several modern editions.

I have mostly modernized the antiquated word usage in prior editions.
Posted by Styxhexenhammer666 at 6:25 PM No comments:

I have completed editing the famous Sword of Moses; Gaster's release from his own manuscript at the end of the 1800s. However, due to Amazon's tendency to conflate copies with similar author names, my (brand new) edition is showing years-old and mostly negative reviews of Gaster's work released in an early and fractured form; Gaster's original document used "X" to denote all mentions of the judeochristian deity (whether Agla, YHWH, Jehovah, or any other sacred name was used!) and did not include the actual list of sacred angelic names required to actually work any of the rituals therein.

My edition is updated, modernized in word usage, contains the sacred names, and uses the proper terminology for this deity, rather than use "X" several hundred times for a half dozen other words.

I have already contacted Amazon regarding the problem. I won't post the work here until it's solved (the URL for all I know might change and I don't want to link to another edition.)
Posted by Styxhexenhammer666 at 5:49 PM No comments: 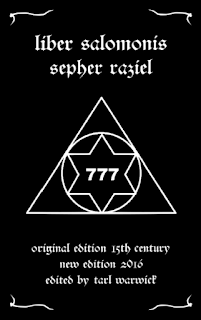 At long last one of the most important grimoires is here; the infamous Liber Salomonis, the so-called Sepher Raziel (which doesn't have much in common with the actual Kabbalistic text of the same title.)

As aforementioned on this blog it is arranged into seven treatises, all subjected to astronomical and Lesser Keys-style angelic names and powers. Like many grimoires, it arranges things into categorical systems using numbers like 24 (the hours of the day), 7 (the days of the week), and so forth. It contains thus a list of 24 sacred stones like topaz and sapphire, a list of 24 sacred beasts in four elemental categories, a list of 24 herbs and their powers, seven types of incense used as fumigation, seven angels, and such, all subject to the four elemental classifications.

A great proportion of this work dwells upon calling, expelling, or securing answers from "airy spirits" and devils of various kinds- not exactly a diabolical work per se, as all of these workings and enchantments are in turn subject to the practitioner remaining "clean and chaste" and fasting while praising the various names of the judeochristian deity. Interestingly, it alludes as well to transfigurations and other workings popular at the time- such as the use of a simple enchantment which is able to make a building seem flooded by water using only a squid and a bucket of sea water, the same being true of snow, blood, or apparently any other fluid.

I have modernized the text without changing its meaning and have left much of the invocation material in old english for continuity- elsewhere I have attempted to translate sometimes unused, archaic terms to their modern equivalent. For example, most of the herbs and animals are referred to either by their old-time name or even in Latin (like psyllium.) I have removed the Latin headers which once existed there because they merely echo the english in the subsequent paragraph for no reason.

I am now three quarters of the way through editing the (extremely antiquated) Liber Salomonis; a Hermetic era compilation of treatises masquerading as a Kabbalistic work from the times of Solomon or (as the text claims) even the times of Adam under the name "Sepher Raziel." I have already discussed in brief the obviously falsifiable claim of its ancient origin, but as a purely European text merely deriving content from Hebraic material it does not disappoint; it's extremely dense, and sometimes you will see the same word spelled in four or five variations in a single treatise, but the resulting material, once edited into an easier form, is quite good.

Perhaps the most important part of the work, the Ala or wings, which I have completed already, dwells upon the natures of twenty four each of herbs, beasts, stones, and letters, as well as speaking of the elements and principle virtues and powers behind the same. It gives lengthy passages on the creation of incense used to fumigate oneself, or a home, or a tomb, or anything else, and by means of the same work various enchantments. Interestingly, most of the "fish" spoken of (whales, dolphins, squid) aren't fish, biologically speaking; quite telling, regarding its date of origin.

A few of the species of herbs mentioned in this work I covered in Fruits of Eden and the use thereof and the virtues or evils from each species appear to largely agree with the other materials I consulted for writing my own herbal- marjoram and chicory are mentioned frequently both in the herblore as well as the creation of seven specific fumigations each for one day of the week and each with its own power and purpose.

Funnily enough, while this work speaks of Solomon and Hebrew letters, at the time it was made the jews, in Europe, were being frequently outed by kingdom after kingdom, migrating around the continent as worried christians remarked that they were causing outbreaks of plague or poisoning wells and fields alike.

In other news the; Stone of Urine, by Hollandus, is already fully edited, but I have not yet illustrated the same; I'm too focused on the Liber Salomonis and I'm still suffering from the end of a mild cold; sneezing on ones' illustrations is not a good way to spend your time productively!
Posted by Styxhexenhammer666 at 10:06 AM No comments: 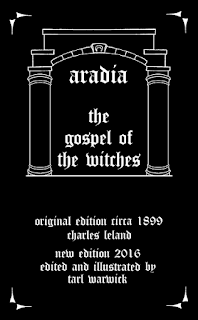 At long last the Aradia, Leland's most important work, is available from yours truly.

Unlike most of my releases, this one is almost more science and history than strict occultism- as an anthropological study (albeit one with some controversy behind it) it focuses on both the dogma and rituals of certain groups in Tuscany during this pre-modern period which practiced a sort of folkish witchcraft as part of what we might consider a pagan, Romanized religious cult.

Indeed, Leland claims it is this pagan group, and not christianity, that was dominant at the time; we may be seeing, in my opinion, here, Leland conflating a folkish tendency among the population with a wider religious force- this would make sense, since not long after this era both the Italians and Germans began openly adopting folkishness in an ubermensch sort of manner.

The rituals become less difficult to understand when compared to some of the other ritualism mentioned in grimoires from before this period- the permeability of the French and Italian cultures of this age would have allowed a great deal of knowledge to pass from the enormous corpus of French literature through the Italian cycle which itself was quite large.

It should be noted that while modern Wiccans credit this as a work describing their own movement it is far closer in form to genuine neopaganism in the European sense than to Wicca.
Posted by Styxhexenhammer666 at 1:19 PM No comments:

I'm glad I made my prior post about the Aradia.

As it turns out the copyright wasn't an issue; what did emerge was that the template I used was faulty somehow and the cover art was off-center by a good centimeter or so. I sized it properly from Createspace' own template site so I'm not sure how this happened, but I'm a stickler for format now, and even plan to go back and correct (minor) flaws in my older works as soon as my current work is done. It may be a few days to a week before this is fixed since I have to redesign the cover, apparently, in a different format.

In other news I have begun work on the Liber Salomonis which of course is a hermetic era text masquerading as a Kabbalistic work called the Sepher Raziel. Since there are at least three major versions of the same I decided to use the one which was most complete, even though the antiquation of the language usage is making the editing more slow than for other versions. This specific text claims to be Solomonic but is certainly of primordial European manufacture as evidenced by its ritualized content which appears to both borrow from and give content to other contemporary grimoires in the European tradition; especially the Red Dragon.

It's a good work overall and longer than some grimoires at about 90 pages before any artistic content is added. It will be a worthy contribution to the literature I'm releasing.

I also have a basic schedule for when other works will be done:

-Liber Salomonis should be done by early March.
-Both of Hollandus' short-ish works done by mid to late March. These might require no more than two or three days to edit apiece.
-An edition of the Ars Goetia done by the end of March, or at latest mid April.
-A full edition of the Lesser Keys to be released, containing the Ars Goetia as well as the traditional content therein done by mid May.

I am additionally preparing to re-edit "Morbid Stories" into a proper format with new art, and release Morbid Stories II. I'm still in the beginning stages on my other works.
Posted by Styxhexenhammer666 at 10:58 AM No comments: