That happy time is fast approaching; the monumental 150 edition milestone is only two works away, and so it's time for an update and to lay out my plan for the coming stretch of about a month or two.

First and foremost, edition #149 (which I have formatted and completed the preface to as of this morning) will be on Malay magicm entitled "Shaman, Saiva, and Sufi." It's a fairly standard mid length Victorian work that I think people will enjoy. As for edition #150 I am split between a work on mysticism within islam, or else the Theurgia Goetia (which is half pictoral, meaning I'd edit it and have it re-illustrated, I hope, by my usual illustrator, while the next phase of my literary work begins.)

Secondly to the next phase of my literature, before I proceed beyond edition 150 there are two things I'd like to do.

1. Fix the cover art and format of a few dozen of my oldest works which are not up to par, along with the occasional noted grammatical error.
2. Render every edition into an ebook using the actual kindle file type, not pdfs, so that they translate better onto a digital notebook.

The process involved with those steps will take some weeks but presumably be worth the effort. I look forward to the final phase of this particular step in my literary workings.
Posted by Styxhexenhammer666 at 6:00 AM No comments: 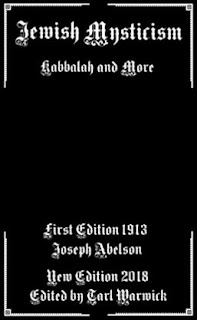 One of a number of interesting spiritual works released by the same publisher in the 1910s, Abelsons' treatment of mysticism within Judaism here is quite good, expansive, and sometimes dense, but technically an introductory overview of magickal concepts within Kabbalah.

Speaking of the Yetzirah and Zohar among other works, it is somewhat a work of linguistic anthropology, which makes sense, since a lot of the theological and mystic concepts of Jewish spiritual lore are fundamentally derived from the Hebrew language and number systems. 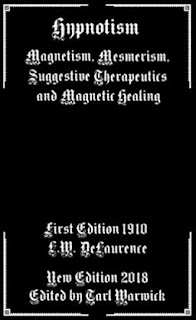 
This work is one of the better things that LW DeLaurence wrote. Containing fewer self-advertizements and a lot more how-to content, it dispels some myths about mesmerism and hypnotism, and proposes about a dozen methods by which various suggestive states can be induced- including the famous trick of hypnotizing a chicken using a chalk line or a finger (it apparently does indeed work.)

While some of the methods are now known not to function (at the time this was written- and it alludes to it explicitly!- the French were experimenting with spinning wheels and lights to induce anesthesia- one of the earliest- maybe THE earliest literary reference to this trope!) others are accepted even today. Some of its content would later be adapted into the 20s and 30s era "how to hypnotize your friends" style pulp works. 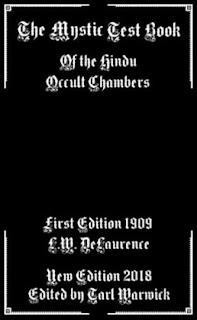 This is one of the stranger works of the early 20th century. Written by the famous DeLaurence, it seeks to teach the reader how to use crystal gazing to contact spirits and help people with various issues, and to impart the secret of telepathy. It also covers the use of the seance to contact spirits, among other tricks within the spirit realm (while considering these spirits to be very much hermetic in form; that is, the sylphs, undines, etc.)

While some of the practices here are related predominantly to DeLaurence advertizing his own goods and services, it is true that some of them remain in use, and are of occult interest to this day.