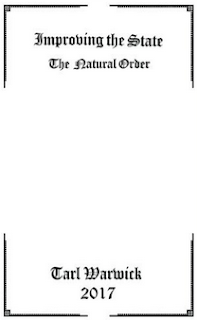 This tract is one that I thought prudent to finally write; it won't be alone, either- I am working on new titles against communism and corporate media as well as on resisting propaganda, among other things. The time has come to write more of my own works in among those I am editing- especially since I have far too few political materials available here considering that's what so many people know me for.

The content of the work is primarily a guide to several relatively simple ways to improve the nature of states in general and of the United States in specific. It is a fusion system; one part constitutionalism to one part nationalism, in essence (of course I had to explain the difference between the latter and fascism, because they are often wrongly conflated.) I let myself go on a limited pogrom against communism as well, but had to save the really good criticism for my separate work on that subject more specifically. When I realized that we were three constitutional amendments from a substantially more stable and benevolent state I actually surprised myself slightly, considering the convoluted and strangulating nature of our current authoritarian-lite government style.

The Magic of the Middle Ages: Now Available! 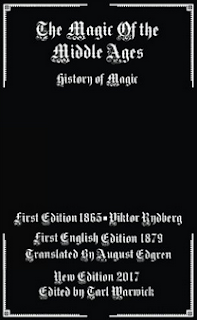 This work is Rydberg's finest- an academic compilation of subjects ranging from a treatment of the burning times, and of religious philosophy (dualism, specifically) to short passages on some cryptids of note, to various meanderings through the high ritual magick and alchemy of the era spoken of. Clearly hostile to Catholic lore, Rydberg manages to choke back his disdain of that church long enough to give it a fair shake at explaining its constant pogroms through especially the era of King James.

Its third section is a strange sort of quasi-fictional tale involving a group of men time traveling to the dark ages and confronting a sorcerer who is under the belief that he himself conjured them, written partly in the first person.

Tomorrow I anticipate finishing a very good academic work entitled "The Magic of the Middle Ages"- it combines some cryptid lore with a short of short story involving an alchemist and mage and a group of Victorian men traveling back in time with black magic. Added to this is an extensive treatment of the burning times especially the cultural and religious effects of the Malleus Maleficarum (the 'witch hammer'.) With some of the largely useless notes removed and in its new format it runs about 110 pages altogether.

I am also editing a work on Telepathy, and with a few more works along those lines the final category will be created; one specifically for the psychic arts and related concepts.

While these two works are being finished off I have temporarily halted the two herbals I have sitting there in different levels of completion; as the weather grows warmer I predict that I will have more interest in plants and botanical medicine and their related sub-topics, as my spring fever erupts in full scale.

The first two chapters of a political manuscript I have been working on are also complete.
Posted by Styxhexenhammer666 at 8:46 AM 1 comment:

I am extremely excited to announce that at long last, after centuries of waiting, the world will soon be able to enjoy a proper, physical, non-paperback edition of one of the greatest of all grimoires ever penned by mankind; the infamous, notorious Petit Albert; the Little Albert of Hand of Glory fame, now to be released by Ouroboros Press.

A thousand cloth-bound copies of this work are being printed along with 475 leather bound and 25 vellum-bound editions; this fully illustrated grimoire is somewhere just shy of the Grimorium Verum in terms of its diabolical nature, and contains a large number of folkish rites and practices which drew from cultures beyond the borders of France and were essentially cosmopolitan and eclectic. The content ranges specifically from obtaining love and sex, to talismans, to medicinal compounds, to (oddly enough) restoring the hymen and preventing your girlfriend from having sex outside of your relationship. Add this to its recipes for soap and liquors and you have a rather strange mix of magick from the period which would directly, it seems, inspire the late 19th centuries' recipe books and family "physician" manuscripts of such great lore.

For those who were interested in patronizing such a release, now it has finally come to be.
Posted by Styxhexenhammer666 at 5:35 PM 7 comments: 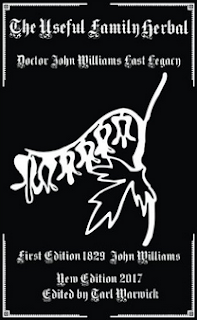 This little work manages to compact a large number of recipes (receipts) into a very small page size. Crafted in the early 19th century, it is semi-antiquated in word usage, but provides cures, preventions, and treatments for things common in the era, such as tuberculosis and palsy.

It should not be particularly surprising that a large proportion of medical recipes here contain wine or rum, or else are crafted into a sort of medicinal beer- while not all of the recipes are likely effectual (some aren't even remotely safe- lead is usually no longer used as medicine!) many of them certainly would have gotten the user drunk enough to forget their illness. It contains a short index of medicinal species as well and their properties.

How to Speak With the Dead: Now Available! 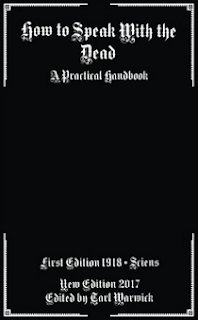 This work is very well crafted especially for its era; the author, known as "Sciens", manages to delve into science and spiritualism here somewhat seamlessly without mindlessly accepting either the spiritual or rational explanation for phenomena he visits within the manuscript.

The majority of its content deals with the structure of a seance and the philosophy behind the basic concept of communicating with the departed- helpfully, the work clears up some misconceptions about channeling and similar topics as well, debunking the idea that, for example, those gathered need to link hands for some electrical purpose. At the end of the work both skeptics and spiritualists are fairly reamed by the author for various excesses.

Despite not posting an update in a while be it known that I have been hard at work; I am very pleased to first announce that the process of re-submitting all the files for ebook releases is now done- all of the titles available as digital downloads on Amazon (90% of them roughly) should be in proper format. If you do find any stragglers left behind and still messed up please leave a comment on this blog or message me elsewhere. The entire process took more than a week.

In other news, "How to Speak with the Dead" is finished and uploaded and should come online later today- I have also begun editing several other works; "John Williams' Last Legacy" (a slightly notorious short herbal and medicinal tract) and Rydberg's "Magic of the Middle Ages" which is a somewhat longer text, and quite dense- that one is sure to go into the academic heading.

I am crafting as well a political work of sorts, one of my own authorship- I am not sure yet how long it will be when completed, but it's sure to fit in with the hyper-political climate of the current era.
Posted by Styxhexenhammer666 at 7:39 AM 2 comments: