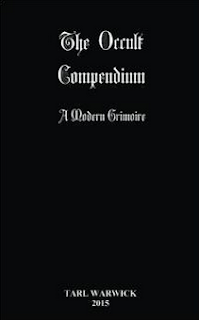 Several years ago I wrote a work entitled Musings: The Occult Compendium. While I was pleased with the content of this work, the format was anything but sophisticated, and the editing needed a little more work. With that in mind I reformatted everything, re-edited it into its new form, and released it here under its new title.

The contents are fairly straightforward; rather than one specific topic it compiles shorter works on related topics; the psychic arts, curses, occult analysis of pop culture, and a refutation of asceticism and why it must be refuted in favor of a more Epicurean ideal. Along with this I included a short list of resources for those interested in the more occult, mystic tradition of spirituality, as well as a long run down on some modern Satanic philosophy.

The original, less attractive work had a more generic cover and was in entirely the wrong trim- an amateurish mistake I made because I was not yet fully used to the createspace design; as well I added a new introduction and table of contents, as well as more content.

It may be seen as a companion to my latest occult work, Occult Philosophy for the Modern Age.
Posted by Styxhexenhammer666 at 10:51 AM