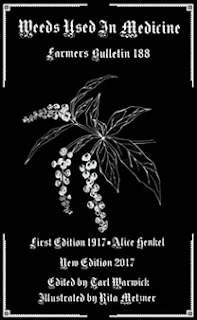 This interesting booklet was released in the early 20th century as a helpful government bulletin designed to inform farmers that some of the weeds they were constantly removing from their land were medicinal in nature and potentially of at least enough value to make the work of exterminating them mildly profitable. It has been beautifully re-illustrated by the talented Rita Metzner. You can see some of her other works here.

It covers quite a few species; datura is here notable along with poison hemlock as plants that are no longer generally considered to be valid within medicine. Catnip is also mentioned somewhat amusingly here as more valuable on the medicinal end; these days of course its primary reason for sale is as a narcotic for peoples' miniaturized lions and tigers. The general medical use of each species, along with a description of its prevalence and appearance, is paired as well with some interesting asides regarding the commercial nature of early 20th century herbal medicine.