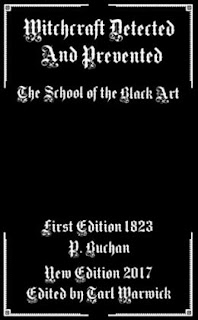 This work is a bit on the odd side because the title is utterly useless in determining its content; reading the title (which proposes the work to purely oppose witchery) and the preface, one would assume it's nothing more than Christian zeal or, at most, white magick. It is in fact based partly on the work of Magnus, partly on the Petit Albert (or some intermediary text) and partly on the fortune telling tradition of the late 1700s with the Norwood Gypsy and other content. As such, it is a bric-a-brac, a gray magick grimoire, and a miniaturized compiling of herbal and folk lore and magic, all combined with some protective incantations and plenty of superstition.

In fact, altogether, it almost rivals the Petit Albert or Hohman's "Pow Wows" for interest in my own opinion- this kind of work is uncommon, and extremely interesting. It also contains some basic chemical works (alchemy!) and weather prognostication with astrological overtones.