Mystics of the Renaissance: Now Available! 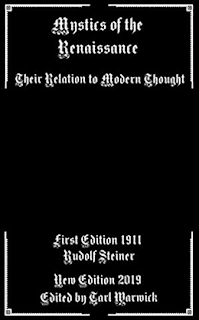 This book is one of those works Rudolf Steiner wrote which primarily compiles and analyzes and draws from secondary sources; namely, as the title suggests, some of the mystic minds of the Renaissance, although it includes, also, Medieval minds and some contemporary work by Eckhart and others. It goes from Paracelsus and Agrippa through Boehme and many others.

The statements made here vary both from those sources and Steiner; it speaks of the nature of being, the nature of divinity, the relationship between man and the deity or deities he worships, and meanders from those into sub-topics as well. It is quite well written and interesting as Steiners' works tend to be. As a pointless but meaningless aside the initial source file was around 300 pages in length, which goes to show you the odd format and line spacing used in the early 20th century.