The Evil Eye, Thanatology, and Other Essays: Now Available! 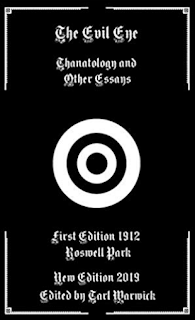 And now comes the first release in quite a while- a compilation of essays and speeches given by the author on medical subjects, mostly of an occult character- it's a fascinating book, with highly variable subtopics.

Perhaps the most interesting material here is on the history of the concept of the evil eye and counter-measures, but the history of the Knights Hospitaller and the history of anesthesia both include surprisingly large amounts of spiritual lore- religious fighting, occultism, underground movements, and more than a little heresy. It speaks at length as well on Giordano Bruno among other notable characters and ends with advocacy for cocaine as a pain reliever so that should give a decent idea of the exotic content.