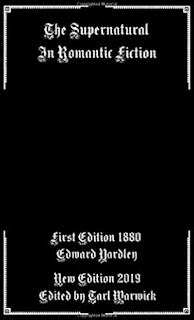 This fairly short work was initially full length and 169 pages long; formatting in that era was often quite interesting. It's an extremely dense overview of many hundreds of bits of literature, the main point of which is to correlate and compare literary tropes, objects, and subjects across books and poetry. The author himself tries to restrain the lore to mostly the medieval and then-modern but gets dragged into some content from the Norse and Hindu systems of religion nonetheless.

As an occultist I see this as a very valuable work, more for its massive number of secondary sources to be used as a starting point to dig deeper into folklore and its cryptozoological and magical offshoots, than any value stemming from its own analysis; although the prevalence of Arthurian legend and the "Arabian Nights" and their enormous influence on then contemporary works is notable.