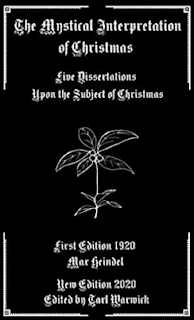 This short work is another by Heindel, a decidedly Rosicrucian, and sometimes quite odd, title, comprised of five short lectures which range from a basic refutation of outright atheistic skepticism, to an embracing of the concept of earth spirits (salamanders, fairies, etc) a la Hermetic lore.

It is quite good; the symbolism of Christmas is covered in brief but comprehensive detail- the holiday of course goes beyond just its base pagan roots, as well as well beyond its Christianized form, either then in the early 20th century, or now in the early 21st.