A Book of Giants: Now Available! 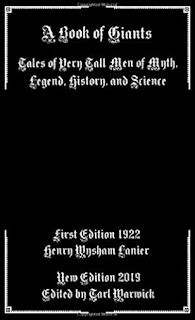 Mythology and legend is a great component of the occult and the study of the same arguably one of the more enjoyable. What could be better than tales of Norse giants? Tales of Norse giants alongside tales of giants in Homers' works and in the middle ages, twain with a short but sweet section at the end of this work on "real" giants (some lore of which is perfectly accurate!)

Technically speaking this work is fiction, but the recounting it does spills over into the specifically occult in its then-modern musings about the subject matter, and primarily comes from works either explicitly or implicitly religious in nature and overtone.