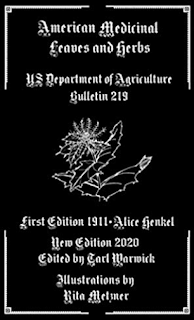 This interesting little work is another of the botanically important circulations produced at the dawn of the 20th century by the US Department of Agriculture- it is fully illustrated by Rita Metzner, whose Instagram you can see here. It lists over 30 species of note that grow within the region of the continental United States- mostly native plant life, with a few European garden escapees. The number of uses is quite large; from expectorants and purgatives to general balms. That is all secondary however as the work was mainly meant for farmers and rural dwellers to be able to identify and exploit species in order to prevent continued US reliance on imports of plant material which were used within a clinical setting as medicine in an era before modern standards and preparations.