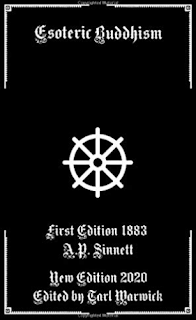 AP Sinnett is the author of this fascinating book- his probably most well known, and one of the better written.

The number of topics covered within it are vast but there are two especially which concern the modern occultist perhaps most of all; the treatment of nirvana, devachan, and the general concept of the afterlife and reincarnation cycle first and foremost, and second to it, a bit about the history of the central Buddha of Buddhism itself. Some of the concepts elaborated on by Sinnett were, here, for the first time, de-westernized, that is, understood in the sense that Easterners actually practiced Buddhism. On some other topics, the mark is missed, but the work itself is quite good.

The fervent absorption of Eastern lore not previously understood or in some cases even quantified by the European and American spheres had begun in fervor by the 1880s.